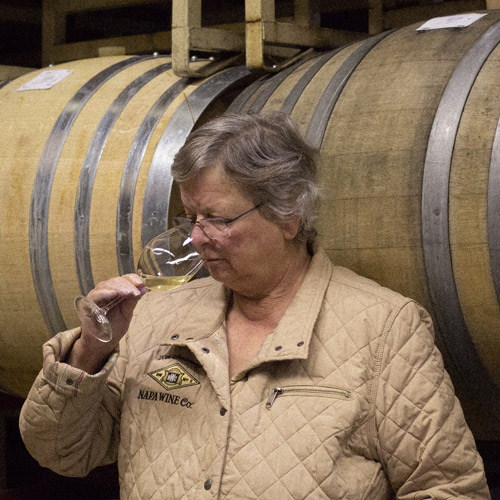 A Berkeley native raised primarily outside the U.S. as her zoologist father travelled the world, Kristi Korford’s intention when studying biology at UC Santa Cruz was to follow in her father’s footsteps. “I was going to be the next Jane Goodall.” Instead she found herself cultivating mushrooms on a farm in Lodi, and also working in the regions’ vineyards, pruning, driving tractors, and hauling grapes to a nearby winery. Wine eventually trumped mushrooms, and Kristi found work as a microbiologist in the laboratory at Robert Mondavi Winery in Napa Valley. Under the tutelage of respected winemaker Zelma Long, Kristi became Senior Enologist, directing work in the cellar and lab for ten years. After taking time off to build a timber frame house with her husband, Kristi returned to winemaking to serve as assistant winemaker at St. Supery, and went on to become Winemaker at Alderbrook Winery in Healdsburg.

In 2001 Kristi joined Napa Wine Company where she puts her technical and practical winemaking experience to use as well as, she says with tongue in cheek, her early background in behavioral studies. Working closely with customers to ensure their wines are produced to their exact specifications is her number one priority. “We make every effort to understand and implement our clients’ goals.” There are many personalities and a lot of moving parts, but Kristi finds the complexity of her job exhilarating. “I get a lot of satisfaction out of completing difficult tasks; it’s perfectly suited to what I like to do.”